Snakes and Ladders is an educational project. It uses gamification to promote awareness of application security controls and risks, and in particular knowledge of other OWASP documents and tools.

In the board game for web applications, the virtuous behaviours (ladders) are secure coding practices (from OWASP Proactive Controls Project 2014-2018) and the vices (snakes) are application security risks (from OWASP Top Ten Project 2013-2017). See also a mapping between these two lists.

The identical board game for mobile apps uses mobile controls (from the Mobile Security Project top ten controls 2013) as the virtuous behaviours and mobile risks (the top ten mobile risks 2014 from the same project) as the vices.

This board game was created to use as an ice-breaker in application security training, but it potentially has wider appeal simply as a promotional hand-out, and maybe also more usefully as learning materials for younger coders. To cover all of that, we use the phrase:

"OWASP Snakes and Ladders is meant to be used by software programmers, big and small"

The game is quite lightweight, and does not have the same rigour or depth as the card game Cornucopia, but it is meant to be just some fun with some learning attached.

Print-ready PDFs have been published - these are poster sized A2 (international ISO 216 paper size 420×594mm, approximately 16.5×23.4in, with 3mm bleed and printers’ marks). But the original files are in Adobe Illustrator, so these are also available for anyone to use and improve upon. We recommend playing using a real die and counters (markers), but you can cut out and make these from the paper sheet itself if you have scissor and glue skills.

We hope it may be of use in any upcoming office party, celebration, festival, seasonal event, application security awareness or training exercise. Or just to help spread the word about controls and risks at work, at college or at school. If you are training anyone about the OWASP Top Ten, OWASP Proactive Controls or the OWASP Mobile projects, please consider giving each attendee a printed copy of the game as a take away.

OWASP Snakes and Ladders is free to use. It is licensed under the Creative Commons Attribution-ShareAlike 3.0 license, so you can copy, distribute and transmit the work, and you can adapt it, and use it commercially, but all provided that you attribute the work and if you alter, transform, or build upon this work, you may distribute the resulting work only under the same or similar license to this one.

Snakes and Ladders is a popular board game, with ancient provenance imported into Great Britain from Asia in the 19th century. The original game showed the effects of good and evil, or virtues and vices. This OWASP game is a poster-sized print-your-own paper sheet with the game board on it. Just get some players together with a die and counters. The virtues are application security controls, and the vices are risks.

OWASP Snakes and Ladders - Web Applications was the first edition created. The objective is to raise awareness of the security controls that every web application should have, but link that with the much more widely known Top Ten Risks. The virtuous behaviours (ladders) are secure coding practices (from OWASP Proactive Controls project 2014-2018) and the vices (snakes) are application security risks (from OWASP Top Ten Project 2013-2017).

Note that some languages choose not to change the EN text for risk and control names.

A digital version (of the English release) is available on Steam Workshop. It can be played with 2-6 players online. While the game itself is a free community download, all players must have Tabletop Simulator in their Steam library. 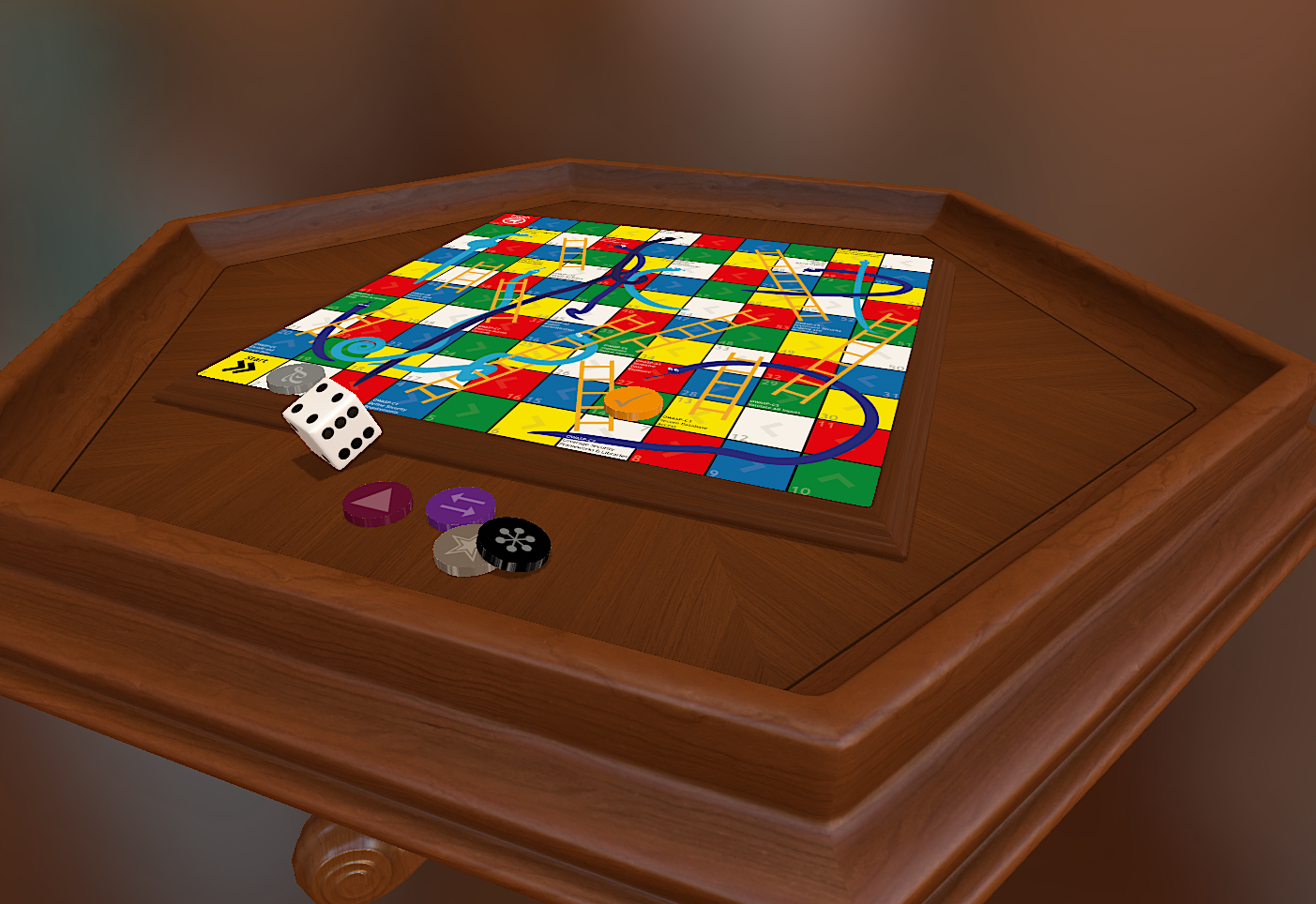 This edition uses simple primary colours, like many versions that can be seen in pictures of Snakes and Ladders games. The colours used in ‘Classic’ are:

OWASP Snakes and Ladders - Mobile Apps was created after working out the idea and design for the web application version of the board game. It seemed easy to replicate the idea since the OWASP Mobile Project lists both security controls and risks. The virtuous behaviours (ladders) are mobile controls (from the Mobile Security Project Top Ten Controls 2013) and the vices (snakes) are mobile risks (from the Top Ten Mobile Risks 2014).

A digital version (of the English release) is available on Steam Workshop. It can be played with 2-6 players online. While the game itself is a free community download, all players must have Tabletop Simulator in their Steam library. 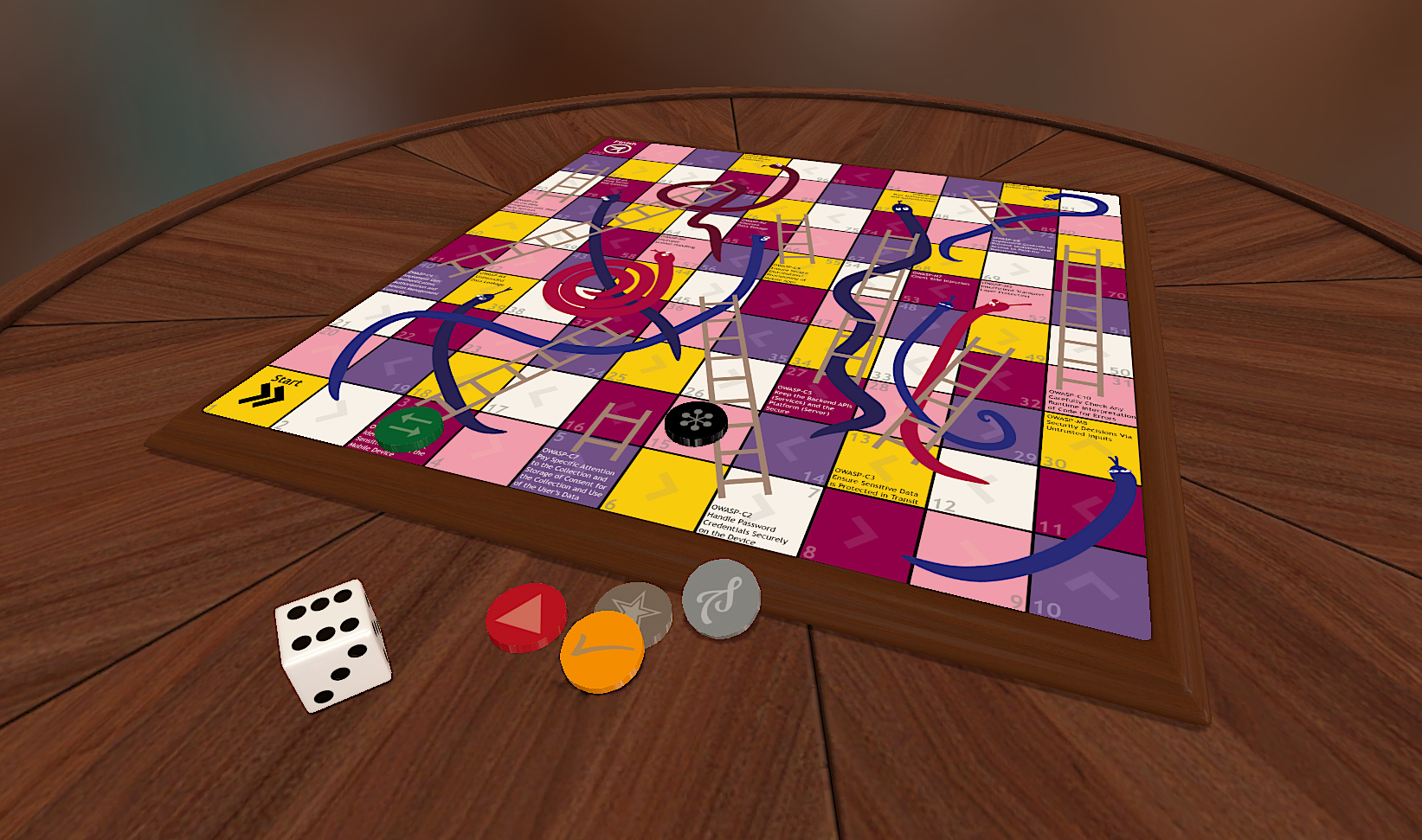 Other people’s versions of Snakes and Ladders use a wide variety of designs and colour schemes. Thus to make a complete contrast to the edition for web applications, the colours used are the designatory colours of the underground and mainline train services that run through Colin Watson’s local station at Farringdon in Clerkenwell, London EC1. The colours in ‘Farringdon’ are:

You can see these colours on tube maps and station signage. The start square (1) is yellow and the final square (100) is maroon.

The OWASP Top 10 is the most well known document, but OWASP has many other resources which provide better approaches for secure application development. In particular, there are some “top 10 controls” lists, and I wanted to highlight those. Creating a board game that features both risks and controls is a simple way to compare and contrast these aspects.

Players do not need to know either the risks or controls on the lists, since they are just the decoration to what is otherwise standard Snakes & Ladders. But as players land on assigned squares, this can be used to discuss the risks and controls they are labelled with.

Also, after undertaking some due diligence, it was noted that since Snakes & Ladders is such an ancient game it is not anyone’s intellectual property and many others have already created thousands of different designs and versions. Other games would not meet this requirement.

How was the game created?

By hard work! Each list of risks and controls contains ten items, so the rough layout of snakes and ladder starting and end points was sketched out on paper, as shown for web applications on the right. Instructional text was written.

The concept was then converted into a layered Adobe Illustrator file, and the text and graphics added. This design went through a number of iterations to ensure it was legible and appealing. The PDF was exported and both the PDF and AI files added to the project page. When translations were provided, these were added as separate text layers in the source Illustrator file, and then new files uploaded again to the project.

Once Web Applications Snakes & Ladders was complete, the file was duplicated and edited for Mobile Apps. This has different risks, controls and arrangement of snakes and ladders. It also has its own colour scheme.

How can I participate in your project?

All you have to do is make the Project Leader aware of your available time to contribute to the project. It is also important to let the Leader know how you would like to contribute and pitch in to help the project meet its goals and milestones. There are many different ways you can contribute to an OWASP Project, but communication with the leads is key. Please see the road map and getting involved section

If I am not a programmer can I participate in your project?

Yes, you can certainly participate in the project if you are not a programmer or technical. The project needs different skills and expertise and different times during its development. Currently, we are looking for users, translators and people to promote the project.

Snakes and Ladders is developed, maintained, updated and promoted by a worldwide team of volunteers. The contributors to date have been:

The project leaders and contributors to the referenced controls and risks:

OWASP staff for helping to set up the project and support its ongoing activities.

Road Map and Getting Involved

Involvement in the development and promotion of Snakes and Ladders is actively encouraged! You do not have to be a security expert in order to contribute. Some of the ways you can help are listed below.

The ongoing priorities are:

Are you fluent in another language? Can you help translate Snakes and Ladders into that language?

The project is on Crowdin.

Use and Promote the Board Game

Please use the Snakes and Ladders Project Google Group for feedback:

Do you have an idea for your own application security Snakes and Ladders board? Please contribute your ideas via the mailing list.