Metrics are used to tell a story to justify an action, such as a security budget, and argue for change2. Metrics are a useful tool to present to management to highlight where there may be gaps in the organisation's security posture that require additional resources to address, or to show that resources spent on security are having the desired effect of reducing risk to the organisation.

To start, examine business processes to see where they can be quantified and measured. Metrics are measured over time, such as quarterly, to show a trend. It is important to know what the desired direction for the metric to move is, up or down, and what activity may have caused significant movement.3

Take note of which Software Development Lifecycle (SDLC) phase has identified the most security issues. It is more expensive to fix security issues later in the development cycle.4 Aim to identify issues sooner in the SDLC in accordance with maturity goals. 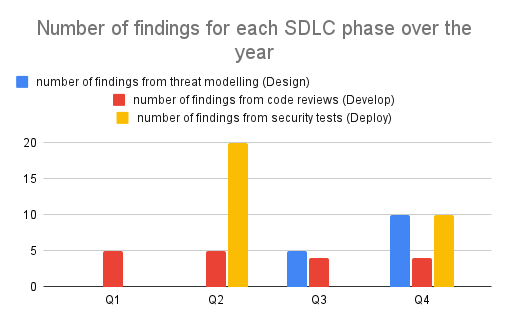 The metric for the number of findings from security tests increases in Q2 as a result of a penetration test. This metric increase is expected. Upon a further penetration test in Q4, the metric has decreased from it's earlier record. This metric change is desired, as it represents a cost saving. The cost of addressing security findings increases at later stages of the development lifecycle.