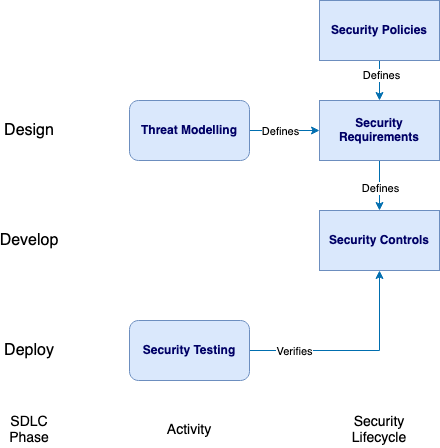 Why should developers perform threat modelling?

When introducing the threat modelling activity, take into consideration the development teams workflow and current tools used. Consider using tools already in use rather than introducing a new tool which may take time to learn, in addition to learning threat modelling.

Threat modelling can be introduced to the development team by a security team member or other team member knowledgeable in security, who is able to convey possible attack patterns and appropriate security controls. It can be helpful for this person to be present in the initial threat modelling activities to provide guidance, before the development team manages the activity themselves.

To introduce threat modelling to the development team, use a system that the team is familiar with.

Terminology used as part of threat modelling and risk management:

For example, the threat of a Cross-Site Scripting attack (in which the threat agent causes unauthorised javascript to run in the victim’s web browser) attempts to exploit a vulnerability in the lack of input validation and use of escaping functions in a web application. An appropriate security control is to use input validation and escaping libraries, and a Web Application Firewall (WAF).

A simplified step-by-step guide of the threat modelling process

Draw a data flow diagram of the system. There are particular tools available that can be used in threat modelling to create a data flow diagram and indicate the threats, such as OWASP Threat Dragon. Also consider making use of any existing tools the development team is already familiar with, rather than introducing a new tool, which may take time to learn and adopt.

Threat model data flow diagrams use a rectangle to represent Actors. A circle is used to represent Processes, such as a web application or API. And a rectangle without vertical edges is used to represent data stores, such as a database or configuration files. Arrows are used to indicate the information flows between the Actors, Processes and data stores. Trust boundaries, dotted lines, are placed on the data flow diagram on information flows between systems to indicate where data changes its level of trust. Finally, identify any sensitive data that exists, either in information flows or data stores. It may help to consult the organisation's data classification policy when identifying the sensitive data.

For further guidance on threat modelling consult the following resources:

The OWASP Cornucopia card game is designed to help developers think about possible threats in a solution design, and derive a set of security requirements to build against. Team members are each dealt cards which describe particular threats. They then take turns trying to make a case for their particular threat posing a risk to the solution design, scoring points if they are able to do so.

OWASP Cornucopia uses threats grouped into areas that are particularly relevant to software developers, such as authentication; authorisation; data validation. The threats are derived from OWASP Application Security Verification Standard (ASVS) and OWASP Web Security Testing Guide. Using OWASP Cornucopia can be useful when it is desired to have security requirements aligned with these standards.