There is nothing new under the sun, and nearly every web application that one may think of developing has already been developed. With the vast number of free and open source software projects that are actively developed and deployed around the world, it is very likely that an application security test will face a target site that is entirely or partly dependent on these well known applications (e.g. Wordpress, phpBB, Mediawiki, etc). Knowing the web application components that are being tested significantly helps in the testing process and will also drastically reduce the effort required during the test. These well known web applications have known HTML headers, cookies, and directory structures that can be enumerated to identify the application.

Identify the web application and version to determine known vulnerabilities and the appropriate exploits to use during testing.

A relatively reliable way to identify a web application is by the application-specific cookies.

The cookie wp-settings-time-1 has automatically been set, which gives information about the framework being used. List of common cookies names is presented in Common Application Identifiers section. However, it is possible to change the name of the cookie.

From the meta tag below, one can easily learn the application used by a website and its version. The comment, specific paths and script variables can all help an attacker to quickly determine an instance of an application.

More frequently such information is placed between <head> </head>tags, in <meta> tags or at the end of the page. Nevertheless, it is recommended to check the whole document since it can be useful for other purposes such as inspection of other useful comments and hidden fields.

Apart from information gathered from HTML sources, there is another approach which greatly helps an attacker to determine the application with high accuracy. Every application has its own specific file and folder structure on the server. It has been pointed out that one can see the specific path from the HTML page source but sometimes they are not explicitly presented there and still reside on the server.

In order to uncover them a technique known as dirbusting is used. Dirbusting is brute forcing a target with predictable folder and file names and monitoring HTTP-responses to emumerate server contents. This information can be used both for finding default files and attacking them, and for fingerprinting the web application. Dirbusting can be done in several ways, the example below shows a successful dirbusting attack against a WordPress-powered target with the help of defined list and intruder functionality of Burp Suite.

We can see that for some WordPress-specific folders (for instance, /wp-includes/, /wp-admin/ and /wp-content/) HTTP-reponses are 403 (Forbidden), 302 (Found, redirection to wp-login.php) and 200 (OK) respectively. This is a good indicator that the target is WordPress-powered. The same way it is possible to dirbust different application plugin folders and their versions. On the screenshot below one can see a typical CHANGELOG file of a Drupal plugin, which provides information on the application being used and discloses a vulnerable plugin version. 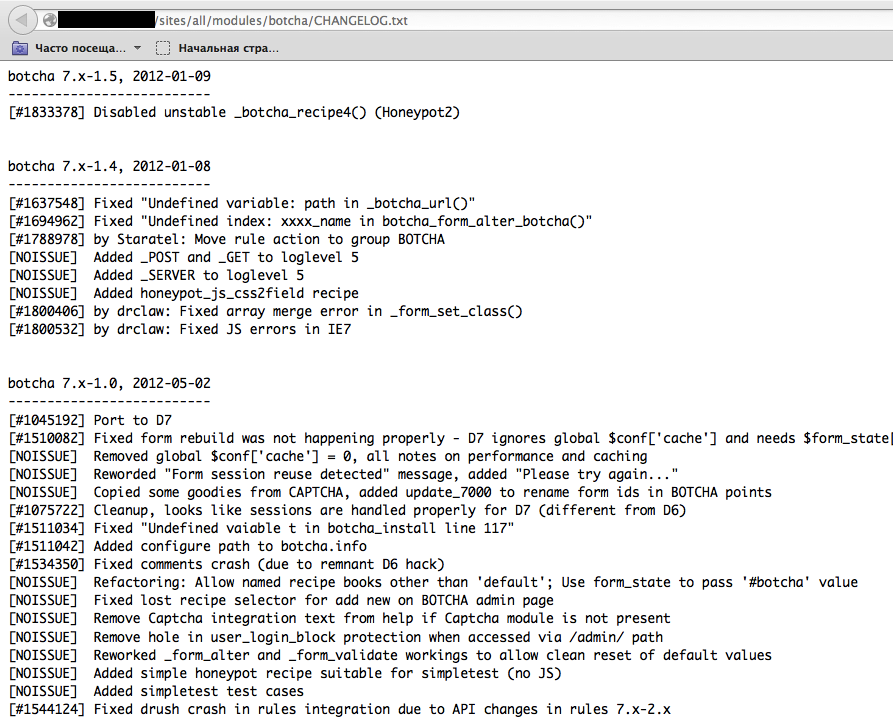 Tip: before starting dirbusting, it is recommended to check the robots.txt file first. Sometimes application specific folders and other sensitive information can be found there as well. An example of such a robots.txt file is presented on a screenshot below. 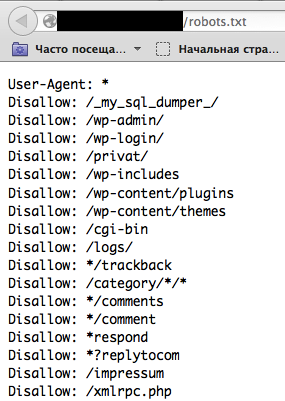 Specific files and folders are different for each specific application. It is recommended to install the corresponding application during penetration tests in order to have better understanding of what infrastructure is presented and what files might be left on the server. However, several good file lists already exist and one good example is FuzzDB wordlists of predictable files/folders.

Sample output of a successful fingerprint:

Wapplyzer is a Firefox Chrome extension. It works only on regular expression matching and doesn’t need anything other than the page to be loaded on browser. It works completely at the browser level and gives results in the form of icons. Although sometimes it has false positives, this is very handy to have notion of what technologies were used to construct a target website immediately after browsing a page.

Note that by default, Wappalyzer will send anonymised data about the technology running on visited websites back to the developers, which is then sold to third parties. Make sure you disable this data collection in the add-on options.

The general advice is to use several of the tools described above and check logs to better understand what exactly helps an attacker to disclose the web framework. By performing multiple scans after changes have been made to hide framework tracks, it’s possible to achieve a better level of security and to make sure of the framework can not be detected by automatic scans. Below are some specific recommendations by framework marker location and some additional interesting approaches.

Check the configuration and disable or obfuscate all HTTP-headers that disclose information the technologies used. Here is an interesting article about HTTP-headers obfuscation using Netscaler

It is recommended to change cookie names by making changes in the corresponding configuration files.

Manually check the contents of the HTML code and remove everything that explicitly points to the framework.

However, these are not the only ways to restrict access. In order to automate this process, certain framework-specific plugins exist. One example for WordPress is StealthLogin.